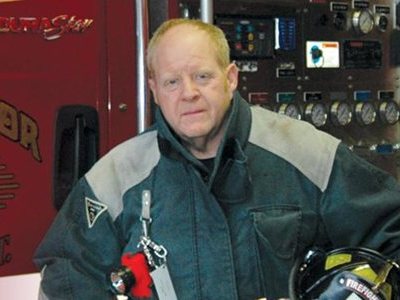 You Never Know What Life Has in Store for You

You never know what life has in store for you from day to day, and nowhere was that more obvious than in the small coastal town of Bar Harbor one day last fall. As the afternoon unfolded, the Bar Harbor Fire Department found itself responding to four different calls, two of which were critical cardiac patients. For these two patients, treatment at a cardiac specialty care center quickly was crucial.

One of the patients was 49-year-old Jai Higgins, a lifelong Bar Harbor resident who works as a firefighter/paramedic and a house painter. He was finishing up work for the day when he experienced significant chest pain. He was only a couple of minutes from MDI Hospital, so he drove himself to the emergency department where physicians discovered he was in cardiogenic shock and experiencing a major heart attack. They immediately called for LifeFlight to transport Jai to Eastern Maine Medical Center. In the meantime, a second patient collapsed on the town dock and went into full cardiac arrest. Upon arriving on scene, the rescue team from the fire department quickly made a second request for LifeFlight.

Though they were in a small town on the coast, both of these patients needed the same care that would be available to them in a larger urban area. They needed the big cardiac center to come to them. LifeFlight brings a high level of experience and knowledge, as well as ICU-level medical equipment, directly to the patient, wherever they are.

In the aircraft, the flight crew used an IV pump to administer important medications and evaluated Jai’s heart rhythm with an advanced monitor specially designed for air medical transport. After just a few minutes in the air, Jai’s heart slipped into ventricular fibrillation (or v-fib), a lethal cardiac rhythm which the flight crew could see thanks to the specialized monitor. Flight medic Carl Zenk was able to quickly administer a shock to defibrillate Jai’s heart and bring it back into a normal rhythm.