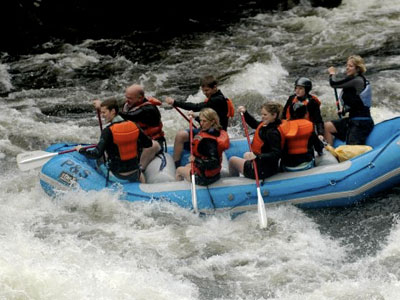 For Kelsey Klibansky, of Beverly, MA, spending time outdoors is simply a way of life. An avid skier, Kelsey also loves to go whitewater rafting, canoeing, camping and fly fishing. She’s been rafting on Maine rivers since she was about 10 and became a rafting guide in 2008. Shortly after, she began working at Three Rivers Whitewater, a commercial rafting company in The Forks, along with her father, sister and uncle who are also guides.

Every summer during a full moon, a group of whitewater guides from The Forks get together for a midnight run of the Kennebec River. Kelsey had made the trip before, and was looking forward to the 2010 event. On the night of the run, Kelsey hopped into one of the cars headed to Harris Dam where the group would start their trip. But before they made it to the put in, tragedy struck. The car Kelsey was riding in went off the road, rolling over several times before coming to rest. Kelsey was thrown from the car, landing about 25 feet away. It took several long minutes for the other guides to finally find her covered in debris under a tree. Her friends tried to keep her from moving while the 911 call was made.

Upper Kennebec Valley Ambulance service got the call for help and headed out to the scene of the accident. They knew that one person was badly hurt and was unresponsive, so before they even arrived on the scene, they activated LifeFlight.
When the ambulance service arrived, they discovered Kelsey had broken her left wrist, severely injured her right hand, and from the massive lacerations and contusions on the back and front of her head, it appeared likely she had also suffered a traumatic brain injury. With this type of injury, it becomes very important to get to a trauma center as quickly as possible. LifeFlight is able to bridge the vast distance between rural Maine and the state’s three major hospitals in Bangor, Lewiston and Portland in situations such as this when every minute counts.

The EMTs on the ambulance worked to stabilize Kelsey for air transport, while members of the West Forks Fire Department headed to the town’s ball field where the LifeFlight helicopter was preparing to land.
When LifeFlight’s critical care crew arrived, they treated Kelsey for her pain, sedated her and placed a breathing tube for the flight back to Eastern Maine Medical Center in Bangor. She continued to be unresponsive during the 23 minute transport back to EMMC and was taken directly to the Intensive Care Unit. Over the next couple of days, the bleeding in her brain stopped and Kelsey slowly regained consciousness. When she woke, she experienced symptoms of a brain injury; she couldn’t walk, had double vision and some short term memory issues, but fortunately these only lasted for about a week.

Kelsey also lost her right index finger and tore all the tendons in her right hand. However, she is thankful to be alive and grateful that she didn’t lose her hand. At heart, she is an artist and a writer. Recovery could have been much more difficult had she needed to relearn everything using her left hand.

“I have no doubt that Kelsey’s amazing recovery would not have been possible if not for the quick care she received from her friends and the local emergency response. LifeFlight’s ability to stabilize her at the scene and transport her so quickly to Eastern Maine’s trauma center was key,” shares Todd Klibansky, Kelsey’s father and fellow whitewater guide.

Kelsey was at EMMC for about 10 days, and spent another week recovering at Spaulding Rehabilitation Hospital in Boston. Amazingly she has almost completely recovered from her injuries and has returned to Northeastern University where she studies Cultural Anthropology and hopes to someday become a human rights lawyer. Although she may not be able to ski this winter, she will soon resume all the activities that she loves. She can’t wait to get back on the river next summer and share her love of the outdoors with her rafting family and customers.