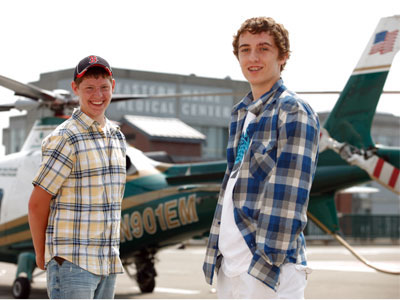 Kody Scott (right) and Devon Maxwell have been friends for as long as they can remember. The high school students grew up together in Lee, just east of Lincoln. Like many rural Maine kids, the boys spent much of their childhood fishing for trout and playing baseball.

As teenagers, one of their favorite places to hang

out is at the community teen center, known locally as 180. The two friends were walking back to 180 after a quick trip to the local market when a car came around a sharp bend in the road and struck both boys. The force of the impact sent Kody and Devon flying several feet off the road.

When Lee’s Chief of Emergency Services Aaron Knowles got to the scene, he immediately recognized that Devon and Kody were critically injured and would need specialized care from a trauma center as soon as possible, so he called for both LifeFlight helicopters. LF1, the helicopter based in Bangor, arrived at the scene of the accident within minutes. The local ambulance crew prepared Devon to be airlifted first. He had broken both bones in his right leg, his left fibula, fractured his hand and had a severe laceration on his left eye.

LifeFlight medic Kalem Malcolm remembers asking Devon if he had any known medical problems. The witty reply was, “Well, I guess I do now.” It was the first sign that Devon might be OK. The flight crew took him to Eastern Maine Medical Center, and he was in surgery less than two hours later.

In the meantime, paramedics from the local ambulance service took Kody to Penobscot Valley Hospital in Lincoln where LF2, the helicopter based in Lewiston, met them on the brand new helipad.

Kody, who had injured his left arm and leg, torn ligaments in his right knee, and fractured his ribs and collar bones, was lifeflighted from PVH to EMMC in Bangor. He was there for 12 days and underwent two surgeries. There was severe nerve damage in his left arm and for a while Kody and the doctors weren’t sure that he’d regain full use of it. Thankfully, though, he has made a full recovery and is back to playing basketball and baseball.

Devon spent about 15 days in the hospital and had a total of seven surgeries to repair all of his broken and fractured bones. Although he spent quite a few weeks in a wheelchair, Devon has also made a full recovery. He’s back to school and looking forward to a year of soccer and skiing.