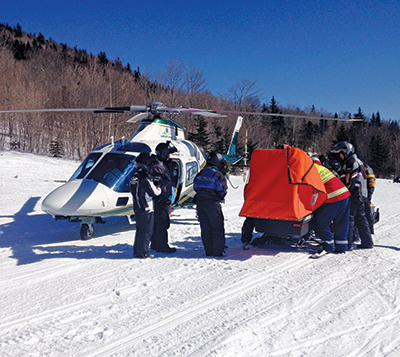 Massachusetts resident Bob Hamm and his wife, Donna, had joined their friends for a weekend at a cabin on Rangeley Lake. They were looking forward to discovering the woods and mountains of western Maine by snowmobile.

On Saturday morning, they were headed down and out of the woods to find a spot for lunch when the skis on Bob’s sled caught some soft snow and he was unable to keep the machine on the trail. The snowmobile hit a tree, catapulting Bob through the windshield and into the tree before he tumbled down a slope and came to rest, unconscious.

As soon as he came to, Bob realized he was in trouble. He was struggling to breathe and couldn’t move without experiencing severe pain. His companions called 9-1-1, and when the paramedics heard that the victim hit a tree, broke his helmet and lost consciousness, they knew it was likely he had sustained major injuries. In this rural part of Maine, a trip by ground to the closest trauma center would take about four hours. A LifeFlight helicopter would cut the transport time in half and was Bob’s best chance for survival.

When the NorthStar EMTs found Bob, he was in rough shape. He had already been in the cold snow for about 45 minutes. He was shaking and his breathing was very shallow. Luckily, there was an established remote landing zone on the trail about ½ mile from the accident scene. Coordinates were radioed to the LifeFlight crew and the helicopter landed right on the trail just minutes later.

The NorthStar crew immobilized his neck and spine while they pulled him down the trail to the helicopter. The flight crew placed an IV and gave him medication to ease his pain, but the most important service they could provide for Bob was to get him to a trauma center as quickly as possible.

Once Bob was loaded onto the helicopter, the flight back to Central Maine Medical Center in Lewiston took only 30 minutes. At the emergency department, physicians discovered Bob had bruised his kidney and liver, and suffered a broken scapula, 6 broken ribs and punctured his lung. He remained at CMMC for nearly a week before he was discharged to continue his recovery at home. Bob spent the next six weeks confined to bed rest while his body healed, but was able to return to work two months after his accident.