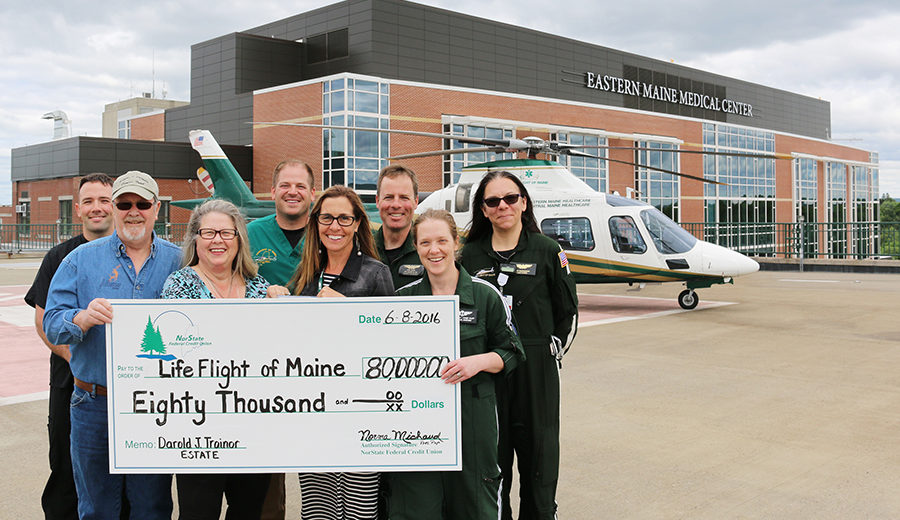 St. Agatha Resident Leaves $80,000 of His Estate to Lifeflight of Maine

Despite never needing the service, Darold Trainor, from Long Lake in St Agatha, left much of his estate to LifeFlight, Maine’s critical care air ambulance. His close friend and personal representative, Norma Michaud, presented a check for $80,000 to the crew of LifeFlight during a recent trip to Eastern Maine Medical Center in Bangor.

Originally from Massachusetts, Darold moved to Maine nearly three decades ago. He appreciated nature and animals, and enjoyed the solitude of the outdoors, making rural northern Maine a perfect fit. Over the years, he developed a close friendship with his neighbors, Norma and Ron Michaud.

“Up here in northern Maine we have so many small towns and close-knit communities,” explains Norma. “We know everyone, we help our neighbors and friends during times of need. We have local families who have lived here for generations, but also newcomers who quickly become part of our own. Darold was such a man.”

Darold became sick in 2014 and Norma provided much of his care, including rides to Eastern Maine Medical Center in Bangor when necessary. During one hospital stay, Darold saw a news story featuring the Islesboro Crossing for LifeFlight, an annual fundraising event for the nonprofit service. He wanted to learn more, so he did some research and read about Mr. Lavertu from Eagle Lake who was LifeFlighted from Northern Maine Medical Center in Fort Kent after his heart stopped three times. He read about little Oliver Cleveland, a two-year-old on the island of Islesboro who accidently swallowed lamp oil and needed to get to Eastern Maine Medical Center as quickly as possible. The more he read, the more he understood and appreciated the need for a helicopter service in a rural state like Maine.

“Being so far up north, we don’t always have access to the care we need in some life or death situations,” said Norma. “Our smaller, local hospitals depend on LifeFlight to transport these critical patients. The families of these patients feel helpless and scared, and experience a rush of gratitude when they hear the sounds of the helicopter coming in to land. They trust in the well-trained and skilled providers to transport their loved ones to the care they desperately need. LifeFlight is crucial in so many small communities like ours.”

Norma remembers Darold used to say, “I’m an old and grumpy man, but I still have a good heart. People should do what’s right for them. They should make an effort to be more kind and giving. It makes one feel good inside.”

After his research, Darold decided to donate as much of his estate as he could to LifeFlight of Maine. According to Norma, “He wanted to do something that would make the world a better place. He wanted to make a difference.”

LifeFlight of Maine is an independent 501(c)(3) non-profit air medical and critical care transport organization. LifeFlight brings lifesaving critical care staff and equipment directly to the patient via helicopter, airplane and ground ambulance. It also provides advanced emergency medical training to Maine’s hospitals, emergency medical services (EMS) and public safety agencies. Overseen by 25 physicians, LifeFlight cared for nearly 1,800 critically ill and injured patients last year. Since its inception in 1998, LifeFlight has transported more than 20,000 patients from every hospital and nearly all of Maine’s communities and islands. 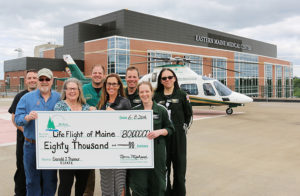