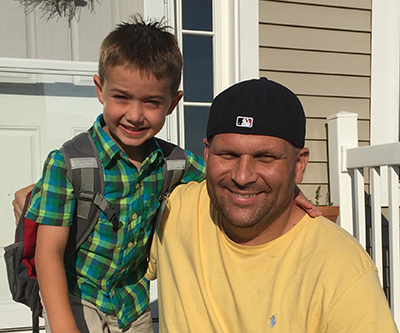 LifeFlight of Maine has been providing critical care transport to patients across Maine since 1998 by helicopter and ground ambulance. For the last several years, there have been a growing number of requests that go unanswered because of bad weather or because both helicopters are already busy caring for other patients.

In May 2015, the organization added a fixed wing airplane to its fleet, which already included two helicopters and access to ground ambulances from Meridian Mobile Health in Bangor and United Ambulance in Lewiston. In the few short months since the airplane was put into service, it has already been a great asset to LifeFlight and Maine’s critically ill and injured patients.

Aaron doesn’t consider himself to be a spiritual person. He fits better in the self-sufficient, practical, down-to-earth Mainer category. But the more he learns about his experience in August, the more he believes that someone was watching over him on his day of need.

Born and raised in East Millinocket, Aaron left home first to attend Kents Hill School and then went on to Maine Maritime Academy. Today he lives and works in Massachusetts, but returns home often to see his family. He was in Millinocket visiting with his mother, sister and nephews one weekend when he began to feel dizzy and short of breath. He knew something wasn’t right and told his mother he needed to get to the hospital right away. The last thing he remembers is walking into the emergency department at Millinocket Regional Hospital.

It turns out Aaron was suffering from a massive pulmonary embolism. A blood clot was caught in his pulmonary artery, blocking the blood flow and not allowing his blood to become oxygenated. This condition can quickly become serious, often fatal.

The emergency medical staff at Millinocket knew that Aaron was going to require specialized treatment at a major medical center. They made an initial request for LifeFlight to transport Aaron to Eastern Maine Medical Center in Bangor, so the flight crew headed to Millinocket in the helicopter. While they were enroute, Aaron’s condition deteriorated and the emergency physician placed a breathing tube to secure his airway. When the flight crew arrived, they worked with hospital staff to sedate Aaron and hook him up to a special ventilator.

But then Aaron’s heart stopped. The flight crew and emergency staff performed CPR for more than five minutes before his heart started beating again. Over the next half hour, Aaron’s heart stopped three more times, requiring several more minutes of CPR and full resuscitative efforts. No one wanted to give up on someone so young.

What started out as a relatively routine critical care transport, best suited to the helicopter, quickly became much more complicated. The flight crew and emergency physicians realized a change of plan was necessary to make sure Aaron received the care he desperately needed. The team determined that Maine Medical Center in Portland was the best facility to treat Aaron’s illness. The added distance, together with the very real possibility that he would need CPR again during the trip, also meant that LifeFlight’s new airplane was the best way to transport and care for Aaron. The plane was dispatched and headed north to meet the team at the airport in Millinocket. As soon as it arrived, the helicopter repositioned back to EMMC where it would be available to serve other critically ill or injured patients.

Finally, Aaron’s heart began to respond to the treatments and medications intended to stabilize him and he was ready to be transported. He was taken by ambulance to the airport where the plane was waiting to carry him to MMC. During the flight to Portland, the crew maintained his blood oxygen level and worked to improve his heart rate and blood pressure.

Aaron woke up three days later, groggy and confused, and not yet realizing just how traumatic the past few days had been. He was moved to recovery where he worked hard to regain his strength, making great strides in just a few days. He was determined to prove he could walk out of the hospital on his own, which he did eleven days later. Three weeks after that, he returned to his job managing supply chains. He takes care to avoid situations that might cause internal bleeding, but has returned to his life before his ordeal, with one major exception.

“I’ve grown much closer to my family, leaving less and less time between visits back home,” says Aaron. “This was a total life-changing event. A lot of people worked hard to make sure I wouldn’t miss the joys of watching my nephews grow up. I intend to make the most of every moment.”