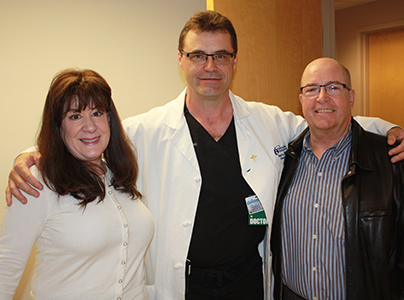 Maine is a state of outdoors people, and our vast supply of natural resources draws like-minded people from near and far to share in our love of adventure. For some, that includes winter sports like snowmobiling and, for Sandra Bastinelli and her husband, George Orton, skiing.

And this was going to be a ski trip to remember. The Frederick Ski Club from Maryland headed north to experience the beautiful mountains in western Maine. The first few days were just what they had hoped. Wide, well-groomed trails, friendly fellow skiers, thoroughly enjoyable amenities.

Tragedy struck on day four when Sandra crashed on an icy trail, striking her head and sliding hundreds of feet down the trail. When George saw her sliding, he instinctively knew she was in trouble. By the time he reached her, she was already showing signs of a severe head injury. Members of the ski patrol brought her down the mountain and, recognizing her dire situation, called for LifeFlight.

An ambulance from Bethel Rescue, manned by long-time paramedic Alberta Broomhall, arrived to transport Sandra down to the landing zone. Alberta started an IV and kept Sandra’s airway clear until the helicopter arrived. These early interventions are critical. If the right care isn’t provided at the right time, all the helicopters and trauma surgeons in the world could not have helped Sandra.

The LifeFlight crew intubated Sandra and hooked her up to a specialized ventilator to ensure her brain continued to receive the oxygen it needed. In Sandra’s case, the speed of the helicopter was the most important intervention. By ground, the trip would have taken more than an hour. Instead, less than 20 minutes later she was at Central Maine Medical Center in Lewiston where neurosurgeon Daniel Lacerte, MD was waiting to take her directly to the operating room.

Sandra was also suffering from broken ribs, injuries to her teeth and jaw and facial fractures. However, the biggest danger she faced was the life-threatening intracranial pressure that would result as her wounded brain began to swell. Dr. Lacerte put all of his considerable skill to work, including a state-of-the-art decompression technique to relieve the pressure on her brain.

Still, her prognosis was not good. The injury was deep and serious and doctors did not give her much chance for recovery. For 18 days, she lay in a comatose state at CMMC, watched closely by a multitude of friends and family, not to mention the caring and talented nursing staff in the intensive care unit.  The minutes and hours became a blur until day 19, which George remembers clearly. That was the day Sandra opened her eyes and looked at her husband. He could tell she recognized him and understood where she was, and he’d never felt such relief.

“The real miracle here is the remarkable system Maine has developed to deal with this kind of emergency,” said George. “The system that started on the mountain with the ski patrol was continued by Bethel Rescue, LifeFlight of Maine and its medical staff, the Emergency Department at CMMC, Dr. Lacerte and all the other medical and nursing staff at CMMC. They are all crucial links in an incredible system that works. This is why Sandra survived.”

Sandra was soon moved out of intensive care and, 33 days after the accident, she was on her way to a rehabilitation facility in Baltimore. Following another month in rehab, she was finally allowed to return home to continue her long journey to recovery. And what a recovery it has been. She has made tremendous strides, learning to walk and talk again, and even ran her first 5k less than six months after she left the hospital.

George and Sandra returned to Maine a few months into her recovery, visiting many of the people who cared for Sandra after her accident.

“You have a lot to be proud of here,” Sandra told the flight crew, surgeons and ICU staff. “We came back to visit because we wanted everyone to see what quality of care can mean. It’s obvious that it has had a huge impact on my recovery and my quality of life.”

“Life for Sandra continues to improve as her recovery goes on,” said George. “She’s driving again and she is even considering returning to work at the Centers for Medicare and Medicaid Services. We are thankful everyday for LifeFlight and all the other heroes in Maine that made Sandra’s survival, recovery and continued life possible.”