KNOX, LINCOLN and WALDO COUNTIES—During the months of March and April, 1¢ from every gallon of gasoline sold at all Maritime Farms locations will be donated to LifeFlight of Maine. (Click here for a map of store locations) All of the money collected will be used to help purchase LifeFlight’s third helicopter, expected to go into service later this year.

“We are so fortunate to have this service in Maine,” said Susan Page, President at Maritime Energy. “It’s a service you hope you never have to use, but if you do, thankfully they’re available.” 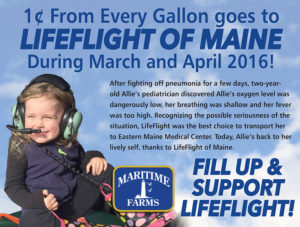 The third helicopter, a much-needed addition to Maine’s current fleet of two helicopters, one airplane and dedicated ground ambulances, will be based in southern Maine. On average, LifeFlight’s aircraft fly 800-900 hours per year, nearly 4 times the average number of hours flown by other medical helicopters across the country. And the number of requests for critical care transport continues to grow steadily. The most efficient way to answer all of the calls for help is to add both a fixed wing airplane, as well as a third helicopter. An airplane was purchased and put into service in 2015. Throughout 2016 the organization is continuing its fundraising efforts for the third helicopter.

“The people of Maine need a third helicopter, and local fundraisers like this campaign by Maritime Energy are a valuable way for everyone in the state to contribute a little something to the cause,” said LifeFlight Executive Director Thomas Judge. “We’re grateful to have such a generous supporter in the business community.”

“We’re very involved in our communities,” explained Page. “People like to know who they’re doing business with and where their money is being spent. We’re in it to help each other out and to try and make a difference.”