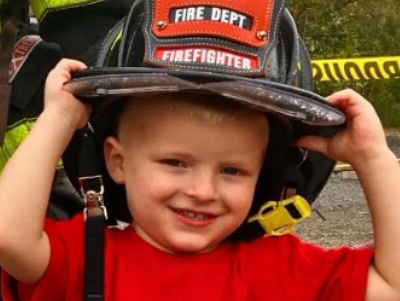 t’s always a bit stressful to have a sick child. You’re never quite sure how serious it is, especially if your little one is too young to tell you what’s going on. When three-year-old Carter woke up in the middle of the night a few days after Christmas, he was coughing and very croupy. His mom, Amber, thought it was just a bad cold. She was holding him, walking him around the house and trying to soothe him, but then he stopped breathing. She immediately called 911, but Carter was beginning to turn blue so she started CPR. When the ambulance arrived a few minutes later, the EMTs took over CPR and transported the toddler to Stephens Memorial Hospital, the closest emergency room.

When a young child in severe respiratory distress is brought to a small emergency department in the middle of the night, tensions naturally start to run high. The nurses and physicians at the rural facility know that the local resources available to help sick kids are limited. In addition, there are often anxious, over-wrought parents nearby feeling helpless and frightened.

A few years ago, LifeFlight launched an educational program called Pediatric Patients on the Edge. Led by Maine’s top pediatric specialists, the program is designed to give rural emergency providers the tools they need to recognize when infants and children are critically ill, and make decisions about appropriate treatment. Having this knowledge also helps ease the distressing environment that typically accompanies sick kids in emergency situations. The staff at Stephens Memorial had just taken part in the program a few months earlier.

The emergency department team gave Carter medication to help him breathe better and administered oxygen, but when the little boy’s condition didn’t improve, they knew he needed specialized care at Maine Medical Center in Portland. The trip from Norway would take more than an hour by ground ambulance, so the staff called for LifeFlight. By helicopter, Carter would be at MMC in less than 20 minutes. What’s more, the experienced medical crew would provide specialized care during the flight after collaborating with both the physician at Stephens and the pediatric specialist at MMC.

Carter was only at Maine Medical Center for about three days, but he continued to battle respiratory challenges and was in and out of the hospital all winter. An ear, nose and throat specialist finally discovered an infection in Carter’s throat, and also diagnosed him with a smaller than normal airway.  He was prescribed a daily medication and uses a nebulizer at the first sign of a rasp. Thankfully, he hasn’t been back to the emergency room since his diagnosis. Today, he’s back to being a typical little boy. He loves dinosaurs, fire trucks and trains, and he’s always on the go. The only time he likes to slow down is when he’s helping take care of his new baby sister.