Lifeflight Heads to the County to Provide Support During Flooding Crisis 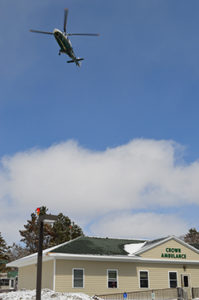 ne, critical care air transport, to be stationed at the Presque Isle hospital temporarily so that the crew can assist as needed during the local crisis caused by flooding at several central Aroostook locations. TAMC is a member of EMHS, and LifeFlight is a joint venture program between EMHS and Central Maine Healthcare in Lewiston.

“Part of our emergency preparedness plan calls for the use of mutual aid when needed to help us safely care for the residents of the 16 communities served by Crown Emergency Care.  We routinely move our own staff and ambulances throughout our service area to assure that all of the residents have emergency care at all times. Today, we expanded that plan and reached out to our friends and colleagues at LifeFlight by asking them to have a helicopter come to TAMC and be based here for the next day or so,” explained Daryl Boucher, the director of emergency services and critical care at TAMC.

The hospital took this step after local flooding caused road and bridge closures that isolated the east side of Fort Fairfield as well as the Washburn community.

“These road closures make it impossible to access these areas by vehicle should an emergency occur and someone needs medical attention,” said Benjamin Everett,  ambulance services supervisor, who has spent many hours traveling between areas of Washburn, Limestone and Fort Fairfield to monitor the situation and coordinate Crown efforts in those communities.  “Another issue of concern is that pedestrians and vehicles are sometimes putting themselves into potential harmful environment that may require them to be rescued.”

With the goal of ensuring a safe, effective response to those needing emergency care during this time, the plan to engage LifeFlight was put into action.

“LifeFlight is a valuable resource for us in times like this.  They can respond directly to a scene if needed, as well as transport patients south if necessary with our limited EMS availability,” said Everett.  “Our Crown crew works closely with them to clear a landing zone, communicate from the ground to the pilot and crew, and deliver the patient to the helicopter.”

While the helicopter will remain in Presque Isle as long as it is needed, according to Boucher, the hope is that it won’t see much air time.

“We hope we do not have to use them, but they are here if we need them.  We wanted them in place to be sure we can provide safe, effective care to the local communities despite these trying circumstances,” said Boucher.

LifeFlight is just one of the effective collaborations the hospital and Crown Emergency Care depends on for mutual aid.  Local fire departments, police departments and other hospitals are also valuable partners during emergencies.