Paul is a New England native who graduated from Norwich University in 1988 with a B.S. in Mechanical Engineering. He was commissioned as a 2nd Lt in the U.S. Air Force shortly thereafter and subsequently attended USAF Undergraduate Pilot Training (UPT), graduating in 1990.  Paul attended follow-on training for the KC-135 and was assigned to Plattsburgh AFB NY.

He upgraded to Aircraft Commander and Instructor Pilot, finally becoming a Formal Training Instructor at Altus AFB OK where he trained new pilots on the KC-135.  He has participated in every major operation where airpower was involved since Desert Storm and has over 500 hours of combat time.  He is a graduate of the USAF Air Command and Staff College and Instrument School and was Chief of Weapons and Tactics.

He retired as a Flight Commander with the rank of LtCol.  Paul and his wife, April, live in Hudson with their two daughters, Anna and Beth. 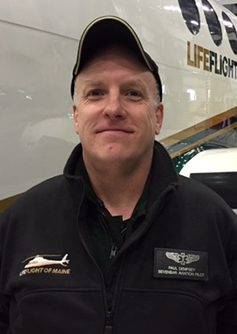