Pat has been a New Englander all his life. He grew up in Massachusetts and lived in New Hampshire for much of his adult life. He now lives in Maine. Pat joined the Army as a VIP helicopter pilot and served overseas in Germany for six years. He returned to the New Hampshire Army National Guard, where he spent the remainder of his twenty years of service as a MEDEVAC pilot.

Pat was deployed to Bosnia and Iraq, where he discovered a genuine love for flying emergency medical helicopters. He was honored to be part of a medical lifeline for soldiers, and now for the public working for LifeFlight.

He truly enjoys his work, the crews, mechanics and dispatch personnel he works with, and looks forward to many years of flight serving the fine people of Maine. 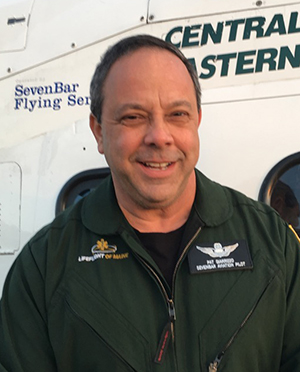