A 1984 graduate of the Central Maine Medical Center School of Nursing, Lori Metayer, RN, BSN, MS, CFRN, EMT-P, went on to earn her bachelor’s degree in nursing from the University of Southern Maine in Portland and later gained paramedic certification. Most recently, she earned her master’s degree in healthcare administration from New England College in New Hampshire.

Her nursing career began in the CMMC Intensive Care Unit. She was later named manager of the Orthopedic-Neurosurgery Nursing Unit and then worked for three years as a nursing supervisor, but her interest in critical care nursing drew her back to the ICU and Emergency Department. In 1998, she was named CMMC’s Emergency Nurse of the Year and immediately joined the newly forming LifeFlight program. Lori is a member of the public relations committee and board for the Association of Air Medical Services and is also a member of the Maine EMS Board. She has presented educational programs throughout Maine and nationally, and has led LifeFlight’s work in developing blood donor programs.

She lives in Lisbon Falls with her husband, Shawn, a former LifeFlight paramedic. She spends her time off traveling, playing hockey, riding her Harley-Davidson and volunteering for her local EMS agency. 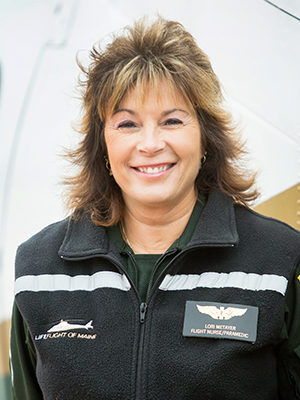