Karl was born and raised in Norway.  After completing his education and term in the Airforce, he traveled to the United States to train to become a helicopter pilot.  Upon completion of his schooling he worked as a flight instructor/charter pilot for a short time. He was offered and accepted a position with a company in the South Pacific, where he spent 7 years supporting oil and gold exploration and a variety of additional missions. He returned to the US in the mid 90’s flying coast to coast (including Alaska) fighting forest fires, and supporting offshore and seismic activities. In the late 90s, he accepted a position in coastal Oregon, where he spent approximately 3 years transferring ship pilots across the treacherous Columbia River Bar in very challenging weather conditions. He joined LifeFlight of Maine in 2002 to be closer to his wife’s family in New England and easier travel back to his family in Norway. 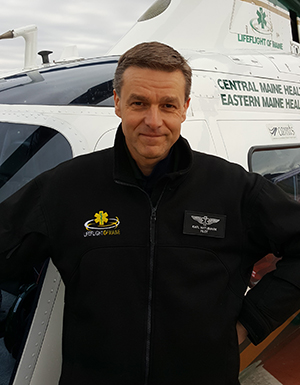