Jared Miller, BS, RN, EMT-P, RRT, FP-C, grew up in Windsor, but left the area after high school, spending time in Massachusetts and Connecticut. He graduated from Quinnipiac College in CT with a degree in respiratory therapy and worked as an RT at Massachusetts General Hospital and Boston Medical Center. While in Boston, he also became a Basic EMT.

Throughout his career, he always enjoyed critical care and emergency medicine, so he continued on in the EMS field, earning his paramedic certification from Stamford College in CT. He then went to work as a flight respiratory therapist/paramedic at Hartford Hospital, where he flew for 5 years.

He eventually found his way back to Maine, joining the LifeFlight crew in April 2004.While working full-time as a paramedic, Jared also went to nursing school. Jared is a flight RN/Paramedic and also works in the Intensive Care Unit. He settled in Winthrop with his wife, Beth, the clinical coordinator for Winthrop Pediatrics, and their children Nathan and Lauren. Jared also likes to play golf and hang out with family and friends. 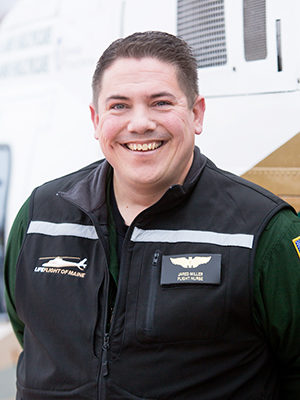