Austin grew up in Vermont and joined the local fire department at a young age. He continued with fire and EMS in a volunteer capacity for more than 7 years while attending nursing school at the University of Vermont.

After nursing school he moved to Greenville, NC to work at Vidant Medical Center in the surgical/trauma ICU. He remained there for three years before he and his wife moved back to New England and both began employment at Maine Medical Center. Austin worked in SCU 3 and neuro ICU.

A year after he moved back to the area, he accepted a position at LifeFlight. He is very excited for the opportunity and looking forward to continuing to grow. Austin says that he missed Maine lobster and the black flies while he was in the south. “Grits aren’t what they are cracked up to be, not even with cheese on top.” 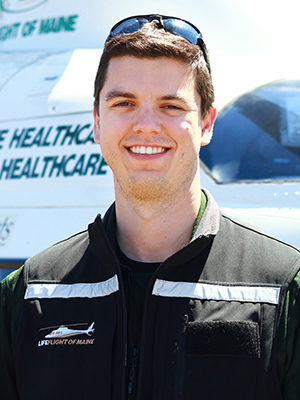