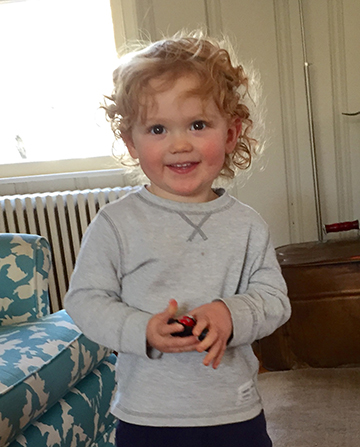 Morgan and Jake had just said goodbye to their sons, two-year-old Oliver and his big brother, James. The young family was on the island of Islesboro, visiting Jake’s parents and enjoying another perfect Maine summer on the ocean. Morgan and Jake were headed off the island for the weekend to attend a wedding, leaving Oliver and James in the capable hands of grandparents.

They just missed the ferry to the mainland and were waiting in the terminal for the next run when Jake’s mother called. Mistaking it for a sippy cup of water, Oliver had just ingested lamp oil. In only a few minutes, he began showing signs of difficulty, wheezing and struggling to breathe. His grandparents had already called poison control and were taking him directly to the island health clinic. Jake and Morgan would meet them there.

Physician assistant Owen Howell has been caring for the people of Islesboro for 13 years. It’s a job that he loves in a community that fits perfectly with the Howell’s family lifestyle. He was finishing up with the last patient of the day when the clinic’s phone rang. It was poison control, advising Owen that a 2-year-old had ingested kerosene, was short of breath and on his way in. When Oliver arrived with his parents, Owen quickly understood the severity of the situation.

First, his training taught him that critically ill children are quite different from critically ill adults. You can see a steady progression of the illness in adults, as signs and symptoms move along at a somewhat predictable pace. Children, however, can appear as though they are remaining stable and then suddenly start deteriorating rapidly. In addition, rural medicine has its own distinct challenges, including remote location and limited resources. The unique nature of this emergency required sp

ecialized equipment that was unavailable at the small island facility. LifeFlight was able to provide equipment, medication and the specialized tools necessary in this tenuous situation. The flight crew and aircraft also provide experienced hands and speed to cover great distances.

Owen took one look at Oliver and knew he needed to get to Eastern Maine Medical Center in Bangor as quickly as possible. He activated the 9-1-1 system which, in turn, requested transport by LifeFlight. Once those calls were made, Owen and the EMS team worked to prepare Oliver for transport. He was first given oxygen and nebulizer treatments. His vital signs were continuously monitored as the ambulance took them to the local airstrip where they would meet the aircraft. The toddler’s vital signs seemed to remain stable, but Owen realized once Oliver started downhill it could be a sudden and rapid decline; one that’s incredibly difficult to reverse.

While enroute, the flight crew told the folks on the ground that there wasn’t an extra seat on the helicopter for one of Oliver’s parents, so Morgan and Jake left their son in Owen’s care and began their journey first to the mainland and then on to Bangor.

As soon as his parents left, Oliver started to fall asleep, a sign that his little body was working so hard to breathe that he was physically exhausted. Fearing it was the beginning of the decline, Owen and his team kept Oliver awake and his airway clear for the last few minutes before the helicopter arrived.

“I’ve worked with the LifeFlight crew on several previous occasions,” recalls Owen. “When they show up, it’s quick. They have all the right tools and each person has a specific job.”

The flight crew quickly assessed Oliver and knew they needed to secure his airway before it was too late. They started an IV and used a video laryngoscope to safely and efficiently place a breathing tube. The tube allowed oxygen to reach the toddler’s lungs, but prevented him from aspirating on the oil. Once the flight crew had Oliver stabilized, Owen called Morgan and Jake, who were on their way to the mainland, to give them an update.

“At one point, I spoke with the pilot, Dave,” remembers Morgan. “He told us they were doing everything they could to get Oliver to the hospital in time. He was so calm, I didn’t realize how dire the situation was.”

Once at Eastern Maine Medical Center, pediatric intensivist Dr. Jonathan Wood and his crew took over. The best course of action was to provide systemic support for Oliver while his body took care of the poison. They were able to remove Oliver’s breathing tube 24 hours after he arrived, and he was discharged from the Pediatric Intensive Care Unit just a few days later.

His parents are filled with gratitude. “It’s unbelievable how positive the outcome was,” says Morgan. “Without the care and expertise of everyone involved, we would be telling such a different story.”

Owen couldn’t agree more. “I’ve never had an experience like this, where I was certain that it would have been truly devastating had LifeFlight not been there. That crew and that transport made all the difference in whether or not Oliver survived. It was truly a profound experience.”