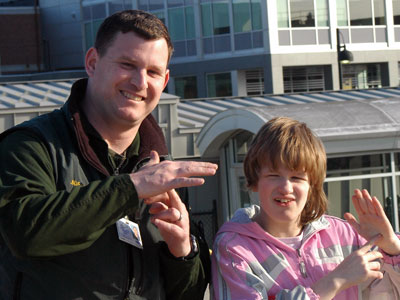 When you first meet Lacey Thomsen, her smile is the first thing that captures your attention. Then you quickly notice her hands. Her slender, nimble fingers are constantly in motion, expressing her thoughts in a very different way than the rest of us. One of her favorite signs: she places

her thumb briefly between her ring and pinky fingers to symbolize “M” before her hands quickly form a modified “time out” sign, with her left hand resting on the fore finger of her right hand. Then she makes a quick twisting motion to show a helicopter.

This original sign that Lacey created herself stands for “Helicopter Mike,” otherwise known as LifeFlight Paramedic Mike Choate. To Lacey, Mike is the guardian angel who took care of her one night in February when she was in excruciating pain and had to be rushed to Boston Children’s Hospital.

Lacey was born with Goldenhar Syndrome, a congenital defect characterized by facial deformities, typically affecting one half of a person’s face. She has had a shunt in her brain since she was 2 days old. In the past when the shunt became blocked and fluid began building dangerous pressure, Lacey experienced seizures. But this time, Lacey just held her head and said she had a very bad headache; something she would not have done a few short years ago.

Lacey, with help from her long-time ed tech Lynda Nailor, has worked for many years to be able to communicate, so it was meaningful that she could tell her mom how she felt and what was wrong.

With quick hands, Lacey tells her story this way:

“I had a bad headache in the night time. It was very, very late and I was sick. I had an IV in the helicopter. It was very loud and I kept asking for my blanket to be over my head. My headache was bad and I kept asking Mike for more medicine. Mom flew in the front of the helicopter. The other flight nurse told mom to be careful not to fall off the roof (at Boston Children’s).”

The specialists at Boston Children’s were able to give Lacey a new shunt, and today her life is back to normal. She’s in a bowling league and also spends a lot of time reading. She loves yard sales, where she finds lots of books and movies with her favorite Disney characters.