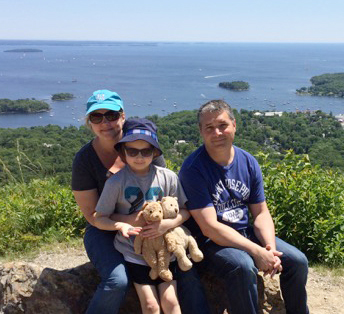 It All Started with Just a Little Cut…

It all started with an innocent cut on the tip of her finger. What followed over the next several months is an incredible story that speaks to both the fragility of life and the tenacity of the human spirit.

her finger as she was slicing pineapple and strawberries. She bandaged it up and went about her day. Over the next week, Cathy felt like she might be coming down with something, but by Labor Day she was starting to act a little confused and disoriented.

Sometime in the early hours of Tuesday morning, her husband Jeff called 9-1-1. He knew something wasn’t right with Cathy, but couldn’t attribute it to anything beyond her flu-like symptoms. As the ambulance took Cathy to the emergency department at Penobscot Bay Medical Center, Jeff stayed with their son, Liam and helped him off to his first

day of first grade. Then he headed to the hospital to check on his wife.
The doctor stopped him before he reached Cathy’s room. They talked briefly about Cathy’s disorientation, but then the doctor told Jeff, “You’re wife is very, very sick. She’s in severe septic shock and her prognosis is grim.” Jeff’s head was reeling. How could that be? It was just a bout of the flu. It didn’t make any sense.

It turned out that a medication Cathy had been taking to prevent blood clots could also suppress her immune system. From just a small cut on her finger, Cathy had developed a serious infection. Her blood pressure was 45/20 and she was running a fever of 107 degrees Fahrenheit. She was going into respiratory failure and her kidneys had already shut down. She needed to receive dialysis, which she couldn’t get at Pen Bay. Her survival depended on being treated at Maine Medical Center in Portland within the next 24 hours, but she wasn’t stable enough to travel by ground. Her best option was LifeFlight—she would be out of the hospital for only 28 minutes and in the hands of specialists during the trip.
As soon as the emergency physician called for LifeFlight, Jeff headed to Portland by car so he could be there when the helicopter landed with Cathy. The flight crew arrived at Pen Bay just a few minutes later. They immediately hooked Cathy up to a sophisticated ventilator that would increase her dangerously low oxygen levels. Then they administered a combination of three different medications to increase her blood pressure enough to maintain a lifesaving supply to her vital organs. During the flight, the crew used a handheld blood analysis tool, called an iStat, to closely monitor Cathy’s precarious condition. With just a couple drops of blood, the iStat tells the crew how Cathy is responding to the treatments they are providing.

They arrived at Maine Medical Center less than 30 minutes later, where specialists evaluated Cathy and discovered she was suffering from necrotizing fasciitis, an aggressive infection caused by the group A streptococcus bacteria that invades and destroys the deep layers of skin and tissue. The only course of action against the ruthless disease is to systematically cut out the infected tissue. Over the next six weeks, while Cathy was in a coma, on a ventilator and receiving dialysis, she underwent several surgeries to remove the dead tissue, a process known as debridement.

About a week before Halloween, Cathy seemed to turn a corner. Her kidneys started to function again and she began to come out of her coma. She was still on a ventilator and remembers how frustrating it was to not be able to talk. Now that she was conscious, all she wanted was to go home. When she was moved to New England Rehabilitation, she asked her therapists to make a list of all the milestones she had to hit in order to go home and went right to work. She had to learn how to walk and spent a lot of time working on her hand-eye coordination.

“I remember the day I got my green bracelet,” says Cathy. “It was a big day. It meant I could walk around my room without the bed alarm going off. I felt so relieved to regain some of my independence after weeks of relying on someone else to do everything for me.”

Cathy finally returned home to Rockland on November 15, nearly three months after she cut her finger. She spent the next year continuing her recovery and undergoing additional blood transfusions. Today, she’s fully recovered and is back to taking care of Liam full time. She also decided to stop putting off school and is taking classes at the University of Maine to complete her college degree.