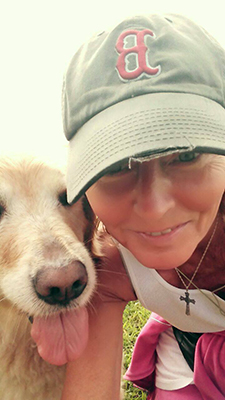 For as long as she can remember, Lori Wing wanted to be a nurse. She started out as a Certified Nursing Assistant (CNA) and worked her way up over the next 30 years. She held jobs in Augusta, New York and California, specializing in everything from geriatrics to pediatrics. So when her doctor told her she couldn’t work any longer, it was a difficult pill to swallow.

Lori suffers from Prinzmetal’s angina, a rare chronic disease that causes spasms in her coronary arteries. Unlike regular angina, symptoms typically strike during periods of rest and often come in waves. After a year of symptoms, physicians were finally able to diagnose it. The condition is aggravated by stress, so Lori had to make several lifestyle changes to avoid stressful situations, including quitting the job she loved.

Lori had a pacemaker inserted in December 2013, but one evening a few months later she started having spasms at about 11pm. She went to the emergency department at Inland Hospital in Waterville where physicians began making plans to move her by ground ambulance to Eastern Maine Medical Center in Bangor. Then a massive spasm occurred, causing Lori’s heart to stop. The call was made to request LifeFlight to transport her to EMMC, but over the next two hours, the emergency department staff shocked her heart dozens of times and worked tirelessly alongside the flight crew to keep it beating. Flight crew members Missy McCann and Mike Choate realized that the only thing that was going to stop the spasm was a nitroglycerin infusion. Unfortunately, Lori’s spasms also cause her pulse rate and blood pressure to drop dramatically, which prohibits the use of nitro. What Lori desperately needed was to be treated by specialists in the cardiac catheterization lab at EMMC.

The crew started five different IV medications and, with help from Inland’s respiratory therapist, put in an arterial line, providing the crew with a more accurate way of monitoring Lori’s blood pressure. They needed to get her onto the helicopter and into the cath lab in Bangor, but every time they thought she was stable enough to move, her heart would go into a life-threatening rhythm or stop altogether, requiring more defibrillation.

Flight Medic Mike Choate recalls, “At one point, Lori’s pacemaker wasn’t working anymore and her heart had stopped. We had been doing CPR for so long with no result, we stopped. We were still standing around her bed, trying to determine how much more of this Lori’s heart could take, when she reached up and grabbed Missy’s hand. Missy asked Lori to squeeze her hand. And she did. No one was giving up after that.”

The crew was finally able to load Lori onto the aircraft, but she required additional defibrillation during the transport to EMMC, and even in the Cardiac Care Unit until she was taken to the cath lab. There specialists inserted a balloon pump to stabilize her and allow her heart to rest, and applied nitro directly into her arteries. Lori remained in the CCU for 17 days. She was on a ventilator for about a week and struggled through liver and kidney failure, thrombosis and additional surgeries. Her doctors took out her pacemaker and replaced it with a combination pacemaker and defibrillator.

She was finally discharged home about a month later, and after a few more months of rehab, she made a full recovery. Today, she eats very healthy, exercises as a way to de-stress, and has made many lifestyle changes.

“I’ve always been a high strung, high energy person. I’ve had to make significant changes in my life,” explained Lori. “I’m back to a healthy level of fitness and I’ve started volunteering at local nursing homes with my Golden Retriever. I’m so grateful that nobody gave up on me.”