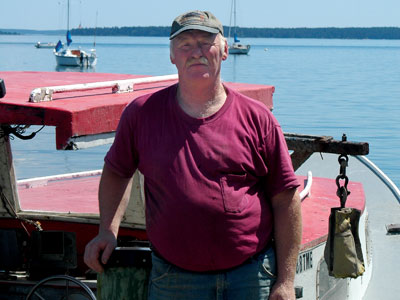 Heart Attack on a Lobster Boat, Miles from Shore

John Stevens, of Brooklin, has been pulling lobster traps for the last 18 years. One morning in July, while he was working on the boat several miles off shore, he began having chest pains. When the pain began to travel down his arm he knew he was having a heart attack. He called a fellow lobsterman who then phoned 911 and explained what was happening and where to meet John. With help from his young sternman, John managed to captain the boat back to shore and dock it in Naskeag, where responders from Brooklin Fire Department met him on the pier. They helped him out of the boat while they waited for Peninsula Ambulance in Blue Hill to arrive. The paramedic from Peninsula evaluated John and determined he was having a STEMI, which is a particular type of heart attack requiring immediate treatment at a specialty center. The fastest way for John to get the treatment he needed was on the LifeFlight helicopter, so they made the request and Brooklin Fire cleared the nearby parking lot to secure a landing zone.

When LifeFlight arrived less than 30 minutes later, the medical crew continued the appropriate treatment already started by the Peninsula paramedic. Thanks to the quick responses and good decisions by the 911 dispatcher, Brooklin Fire and the Peninsula ambulance crew, LifeFlight was able to get John the care he needed little more than an hour after his symptoms began.

Once back at EMMC, the flight crew took John directly to the cardiac cath lab where physicians inserted a stent. With his blood flow restored, John instantly felt better. He had to return to the hospital several times over the next few months, including once for aorta surgery and once to receive a pacemaker. After a long recovery, filled with support from his family and the lobster fishing community, John was able to start fishing again. He set his first traps almost a year to the day after he was LifeFlighted off the dock.