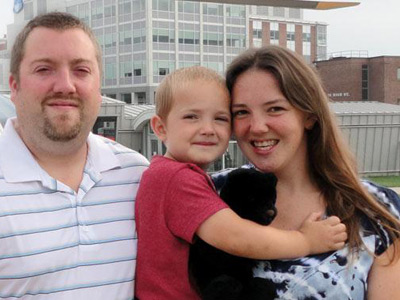 When my son was only two years old, he had to have his tonsils and adenoids removed. Although it was a simple surgery, complications arose two days later.  William had a hard time breathing and his heart rate was very high.  We didn’t know it at the time, but he was suffering from pneumonia.

I rocked him back and forth in the hospital bed, thinking for sure I could make him feel better.  After all, I am his mother.  But William continued to worsen and we were soon wheeled down to the ICU.

When a nurse told me, “Your son needs to go to Portland and there’s no time for an ambulance,” I just lost it.  I remember thinking, “so what now?”  Then she explained about the helicopter.

I thought, “Do I have to fly in that helicopter with him?  I might have a heart attack, but I’ll do it.  I need to be with him.”

Then the crew from LifeFlight walked in and looked me in the eye, and told me everything would be fine, they would take care of my baby. I don’t trust just anybody with my children, but for some reason, I trusted them immediately.

Today, my William is a happy, healthy 4-year-old. Although he doesn’t remember his ordeal, he will always know the special people who took part in saving his life that day.