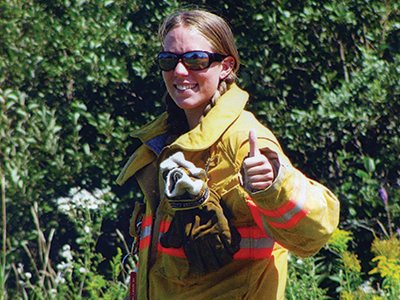 A Pivotal Moment Leads to a Selfless Decision

With 350 year-round residents on North Haven, it’s not uncommon to feel related to your neighbor – everyone in some way is a part of the family. This feeling of family and togetherness is even more noticeable in a time of need.

One late summer day, five teenagers were seriously injured when the car they were in went off the road and slammed into a tree. April Brown was sitting in the middle of the car’s backseat.  When the car stopped moving, and their wits were regained, they climbed out of the car. Eventually a call for the ambulance was made.

“The accident was on the crest of the hill, but there were so many cars, fire trucks, EMS  and community members trying to help  their neighbors, I had to park at the bottom of the hill,”  said John Dietter, NH EMS assistant crew chief. “It was a very chaotic scene with five patients in various levels of disrepair. For North Haven, this constituted a mass casualty, so we quickly triaged the patients and started calling for resources.”

The need to transport patients to the hospital on the mainland is one of the biggest obstacles the EMS crew has to overcome on an island. Generally the ambulance will transport a patient by way of a 75-minute ferry ride, or call Penobscot Island Air for quicker transport in a small airplane. In critical situations, the decision to contact LifeFlight is made. In this case, it was determined that the limited amount of trained personnel, length of ferry boat transport, and number of patients required assistance from both Penobscot Air and LifeFlight. April, who suffered from several compression fractures in her spine, a concussion, broken foot and nose, was evacuated first via LifeFlight. Three others with lesser injuries were flown to the closest hospital on the mainland via airplane.

April doesn’t recall the mayhem around her that night. Thanks to the care and transport she received from the EMS crew and LifeFlight, April was soon back to participating in normal high school activities.

After earning her college degree, she returned to her home on the island. She works with her dad lobster fishing, edits the monthly newsletter and volunteers for the island ambulance service. Having been a patient herself offers a unique perspective when responding to emergencies.

“To this day, I reflect back to my accident and how effective the NH EMS and LifeFlight crews were,” said April, now NH EMS crew chief. “It was a pivotal moment in my life. I learned how carefully orchestrated an EMS call needs to be to make it run smoothly. Knowing LifeFlight is just a call away in our most critical situation when time is our worst enemy is both reassuring and a relief. I know my friends and neighbors are in good hands.”