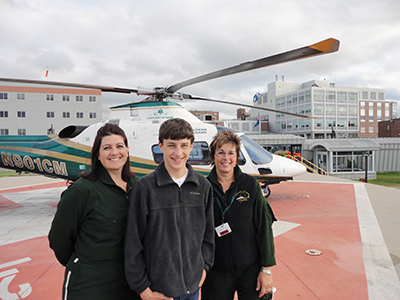 Teenager Henry Stoddard comes from a long line of skiers. He’s been on skis since he was four, frequenting Mt. Abram, Shawnee and Saddleback with his family and with school teams. During February vacation last year he was on the trails at Saddleback with some friends when he caught the top of a ski and lost control. He crashed into an ice bank on the edge of the tree line, breaking both bones in his lower leg.

“It felt like my whole leg was going to fall off and slide down the hill,” remembers Henry.

Members of the ski patrol loaded him into the sled and took him down to the lodge where paramedics assessed his injuries. They were worried a long, bumpy ambulance ride would increase not only his pain, but also the danger of internal bleeding and swelling. This can lead to compartment syndrome, where blood pools in the area of an injury, builds pressure and causes irreparable damage.

The LifeFlight crew met Henry at the Rangeley airport, administered pain medication and got him to Maine Medical Center in Portland as quickly as possible. Surgeons there put a 12-inch plate and 8 screws in Henry’s leg. He spent a couple of weeks in a cast, and another few weeks unable to put weight on his leg, but thankfully his recovery was quick. Since his accident, Henry’s been playing on his school’s soccer and lacrosse teams, and even completed a bike trip from Falmouth to Nantucket.