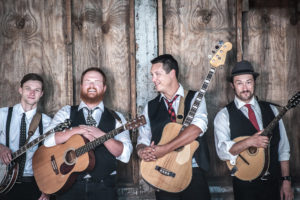 The midcoast is set to stomp the winter away with an old school dance party at the Blue Goose in Northport featuring The Ghost of Paul Revere, Maine’s own “holler roots” band, back home between national tour dates. All proceeds will benefit LIfeFlight of Maine, the state’s nonprofit critical care transporter.

The event features a Meet+Greet+Eat Warm-up Party with the band, including dinner by Cafe Miranda and Andrews Ale.

Born on the banks of the Saco River, brothers in all but name, the Ghost of Paul Revere is Maine’s premiere holler-folk band. With a sound built around powerful three-part harmonies, energetic performances, and a non-traditional way of interpreting traditional American music, their songs have unique identities while still remaining undeniably the Ghost of Paul Revere.

They use a masterful combination of melody and energy, somewhere between folk and foot-stomping bluegrass, that has already given Ghost shows legendary status. Fans have traveled vast distances from the most remote corners of the country to catch the band as they make an increasingly bigger mark on the scene.

“Simply put, this band is one to see live… A gorgeous blend of bluegrass, folk and good old fashioned rock and roll… their performance takes on a boot-clacking brilliance that transforms each song into a full-on participatory event, sending an electric surge about the room that’s near impossible not to feel,” reports Dispatch Magazine.

The event is an independent fundraiser hosted by Camden resident Shannon Thompson, who created the Birthday Benefit party six years ago to celebrate her birthday “in a fun and meaningful way, bringing together great people and great music to raise a pile of money to donate to a good cause.” With a different beneficiary every year, past events have raised several thousand dollars, with hundreds of people contributing.