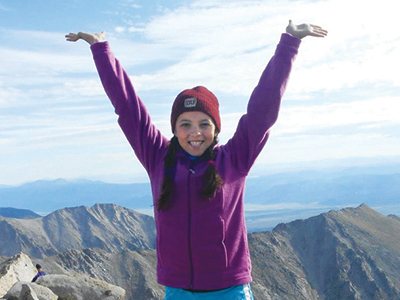 Traumatic Skiing Accident Doesn’t Keep This Girl off the Mountain

My name is Molly Mann, I’m thirteen in this photo, standing on top of fourteen-thousand foot Mt. Shavano in Colorado. This photo was taken nearly seven months after my skiing accident. By only meeting me, you would never know of the immensely traumatic experience I went through. Who knows, if not for LifeFlight immediately transporting me to Maine Medical Center, I may not be here today.

It was January 26, 2012. I was at Sunday River Ski Resort in Newry with my middle school ski team, there for a ski race. We had a few hours before the race actually started, so we were allowed to free-ski until then. My friend Rose and I were skiing together, taking as many runs as we could before lunch. I remember feeling especially fatigued and not myself that day, but I ignored the feeling.

The memory of this day, this particular run, is a hazy blur, it could almost be a dream. I can’t remember all the details. But I do remember this: Rose and I got off the chairlift, and we were whipping down the mountain when we veered onto the trail marked Ecstasy. I clearly remember glancing warily at that dark blue sign, standing out strikingly against the snow. Peculiarly tired as I was, I was lagging behind Rose.

The next few moments are like the blink of an eye in my mind, incredibly rapid, as if my brain keeps pressing the fast-forward button and pointing it directly toward the farrago of memories of that fateful day. In those moments, my knees buckled, and I suddenly found myself sitting on the back of my skis and sailing off the right side of the trail. Then tumbling, tumbling. My last memory is of trees, many trees, poking out of the snow and whizzing by. Then everything went black.

As it turns out, I had fallen off the trail and tumbled down a 25-foot ravine, breaking a few trees on the way, and eventually coming to a stop on my side at the bottom. I lay there for an hour and a half, unconscious, until two of my teammate’s mothers found me, covered in vomit and blood and violently shaking with hypothermia. Turns out, even though I had a very bright coat on, I was not visible unless you deliberately looked down the side of the trail. I had broken my right wrist in two places, a finger, my left clavicle, fractured my skull, suffered a concussion, ruptured my right eardrum, and the tympanic membrane and hearing nerve in my right ear had been punctured.

I was instantly hauled up the trail and off the mountain into an ambulance, then into the LifeFlight helicopter. From there I was brought to Maine Medical Center in Portland where I stayed for twelve days.

Surprisingly, the story of my accident still comes up a lot. I have to have some explanation for the permanent deafness in my right ear. But besides that, I look and act normal, and have made many achievements since my trauma, such as climbing mountains in Colorado the following summer. Fate was on my side that day. I am very thankful that I am still here to tell my story, and that LifeFlight was there to transport me to where I needed to be.