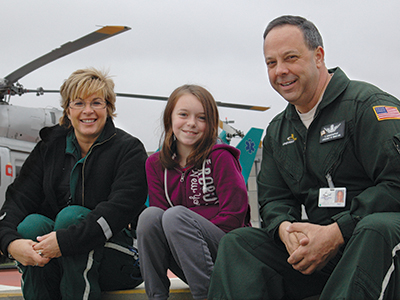 Doctors still don’t know what caused the dangerous swelling in 10-year-old Marissa Tracy’s heart. She woke one morning with chest pains, which is unusual for a child her age, so her mom took her to the emergency department at Redington-Fairview General Hospital in Skowhegan. Physicians there knew something was wrong, but they didn’t have the right tools to perform an echocardiogram on someone Marissa’s age. They transported her to Eastern Maine Medical Center in Bangor where pediatric specialists discovered her mitral valve, which controls blood flow between the chambers of the heart, wasn’t working properly. It was damaged so badly that it couldn’t be repaired, but would have to be completely replaced.

Since there wasn’t a pediatric cardiac surgeon available at EMMC, Marissa had to be transported to Maine Medical Center in Portland. Her condition was precarious and she was already receiving two medications intravenously, which meant Marissa needed the specialized medical equipment and the high level of critical care the LifeFlight crew provides. It was also essential that she spend as little time as possible outside of a hospital, so the speed of the helicopter was another important factor.

“I was scared at first,” remembers Marissa. “But the crew kept trying to make me smile, which helped me feel better. Plus, they let my mother ride in the helicopter with me, so that also made me feel less scared.”

The surgery went without a hitch and after less than a week of recovery in the pediatric intensive care unit, Marissa was able to go home. Today, she leads the normal life of a middle-schooler. The only restriction on her activities is to avoid contact sports, which isn’t too difficult since she prefers to spend her time drawing, painting and hanging out with her four brothers and sisters. One day, she hopes to become an artist or find a career that allows her to work with animals.