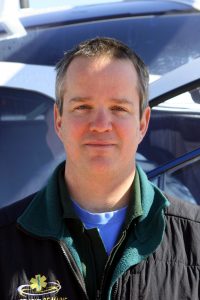 The Agusta 109C MAX helicopters were the perfect machines for the job at the time. The autopilot worked very well and it was a stable, incredibly fast machine. But it was somewhat underpowered, which meant we were limited in how much fuel we could carry, how much medical equipment we could carry, and how much the people on board could weigh – including the patients.
When we transitioned into the E model, we gained a much larger power margin, which enhanced our safety and performance. We could carry more medical equipment and meet the evolving clinical needs of patients in Maine. The navigation package in the E model al- lowed us to officially begin IFR operations.

Each model upgrade also meant more speed, which makes LifeFlight more efficient and more effective. Increasing our average speed by 10 knots cuts about 150 operating hours off of the aircraft which translates to big savings in maintenance. It can also mean we get patients the care they need 5 or 10 or 15 minutes faster, which can make all the difference. 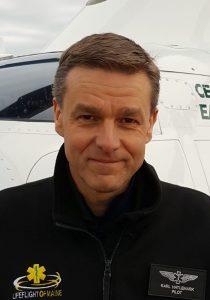 The move from the C model to the E model was a big step up in power. The E model could carry more weight and improved the safety of the program with the addition of IFR capability. With the SP model, we gained an improved navigation package and a more responsive autopilot. Because of the improved autopilot, the SP is more stable in flight and is better at maintaining attitude. The pilot doesn’t have to hand-fly the air- craft. It’s like cruise control – one less thing the driver has to focus on. Autopilot frees you up to pay attention to other things.

The SP is also equipped to do an LPV approach, which is a precision approach using the GPS. This kind of approach gives lateral and vertical guidance (instead of only lateral) down to a couple hundred feet above the ground which means we can land in places with lower visibility, as long as the facility has an LPV approach. 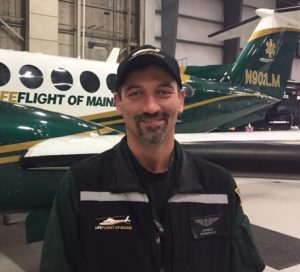 LifeFlight’s airplane, N901LM (or Lima Mike), is the first King Air B200 I’ve flown with the Raisbeck modifications. These upgrades include a modified leading edge on the wings, which changes the angle of attack and allows the aircraft to perform at a slower speed. The result is that we can land and take off on shorter runways – a real advantage in a state like Maine where short runways are common.

The King Air is a good fit for LifeFlight’s mission. It’s an all-weather machine – the list of weather conditions the plane can’t fly in is really short. We fly at 300 mph, up to 28,000 feet, which gives us more options to circumnavigate bad weather. Lima Mike also has upgraded avionics, a Garmin navigation system and electronic flight display, allowing us to shoot almost any approach. We really see the benefit of the airplane in colder months. That kind of cold, icy weather is really where the airplane shines.