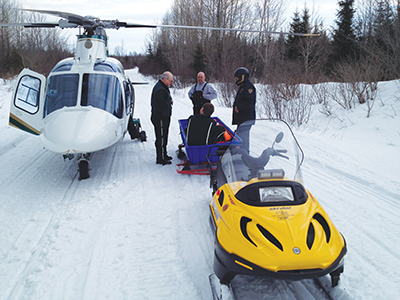 Snowmobiler Bonnie Sancomb was lying on her back in the snow about 45 feet from the trail.  She had missed a corner, the same corner that snuck up on her the day before, but that wasn’t the worst of it.  Her 500-pound sled had landed directly on top of her chest and abdomen and she couldn’t push it off, but that still wasn’t her biggest problem.  What was really causing massive damage was the snowmobile track, which was still turning because the throttle had become lodged in the snow, tearing away at her clothing and skin.
Bonnie, a Massachusetts native, is a snowmobile enthusiast.  Friends introduced her to the sport about three years ago, and she immediately fell in love.  She and her friends travel up to western Maine often to enjoy a weekend on the trails. That March morning, the group headed out early.  They were traveling on a straight stretch of trail when she shot ahead of the group.  She looked down to check her speed, and when she looked back up she was on the corner before she knew it.  She did her best to navigate the turn, but the heavy spring snow made it difficult to maneuver and she could feel it pulling her off the trail.

“I remember going off the trail then a brief silence and then hitting the ground hard,” recalls Bonnie. “I landed on my back and the sled came down on top of me, pinning my left arm.  I tried to push the sled off with my right arm, but could not reach over the spinning track to get to the bumper.  All I could think of was, ‘how do I get myself out of this?’”

Bonnie then heard the rest of her party drive by, unable to see her and una

ware that she was in a dire situation. She waited another 15 minutes or so before they realized she was not at the next intersection so they started backtracking. When the rest of her party found her, they quickly lifted the sled off of her.  They were stunned by the damage the track had caused.  Her boyfriend, Phil, immediately called 911.  Rescuers from Jackman Fire responded, but since it would take them nearly an hour to reach Bonnie, LifeFlight was also requested to the scene.

Phil used his shirt to try and stop the bleeding, and then they waited.  The LifeFlight helicopter arrived first, about 50 minutes after the call to 911. Pilot Alan West circled overhead to finda spot close to the scene to let the crew out. He found a large clearing a few hundred yards away from Bonnie and set the aircraft down just long enough to let the crew out. Once they were safely on their way, he took off again to find a more suitable landing zone.

The flight crew found Bonnie drifting in and out of consciousness, with massive injuries to her chest and abdomen.  She was struggling to breathe and her blood pressure had bottomed out.  Because her body was so cold, it was nearly impossible to get IV access.  Flight medic Josh McNally drilled into her shin bone, an alternative to a traditional IV, so they could administer sedatives and pain medication.  They placed a breathing tube and immediately starting transfusing blood.

Just as they were getting ready to bring her to the helicopter, the crew from Jackman Fire arrived with snowmobiles and a rescue sled. They transported Bonnie and the flight crew back to the helicopter for the 33-minute flight to Eastern Maine Medical Center in Bangor.

The flight crew had called ahead to alert the trauma specialists at EMMC about Bonnie’s injuries.  As soon as she arrived, surgeons took her immediately to the operating room.  During the first 48 hours, she underwent three surgeries to repair the internal trauma.  Over the next few weeks she also underwent an additional 5 surgeries including six skin grafts to help reconstruct her chest and abdomen.

Bonnie spent about 10 days in intensive care in an induced coma, and another three weeks recovering in the hospital before she was given the green light to return home to Massachusetts.  In the end, Bonnie lost her spleen, gall bladder, right breast, and all function in her left kidney. She also had a collapsed lung, four broken ribs, two of which were partially removed.

Bonnie returned to work full-time about 90 days after the accident. Seven months later, she felt almost like herself again, eager to get back to her life of competitive soccer, snowmobiling, whitewater rafting and spending time on Cape Cod with her family.

“My plastic surgeon here in Massachusetts can’t believe how well and how quickly I’ve healed,” said Bonnie. “He jokes that he doesn’t think I’m human.”