Paramedic Pete Allen, CCEMT-P, joined the LifeFlight team in 2009, after working for United Ambulance in Lewiston for several years. Originally from Sidney, he made the decision to pursue a career in emergency medicine when he was a teenager. A close family member was fatally injured in a motorcycle accident and the experience made Pete realize he wanted to be the person to help others in a time of crisis.

He graduated from Kennebec Valley Community College and started his EMS career at Delta Ambulance in Waterville and Augusta. He broadened his scope and also became a firefighter for Augusta and Gardiner. Although he enjoyed the fire service, he was always driven to provide the highest level of medical care possible, so he continued to hone his skills as a paramedic, with aspirations of working for LifeFlight one day.

Pete has two boys and enjoys going on family vacations and hanging out at the ice rink where his boys play hockey. 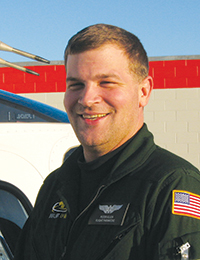