Patrick Perrault, BSN, RN, grew up in Norridgewock and has spent his entire life living in Maine. While growing up, Patrick occasionally had the opportunity to watch his mother at work as a nurse in the operating room. It wasn’t until high school, though, that he realized he wanted to follow in her footsteps. After graduating, Patrick decided to pursue a nursing degree from Saint Joseph’s College of Maine.

For more than 6 years, Patrick has been a nurse in a critical care setting and has deeply enjoyed his chosen career path. “I appreciate that no two days are ever the same,” explains Patrick. “I get to meet a variety of people and I look forward to the challenges that each critically ill patient presents.”

Over the years, Patrick would call on LifeFlight to transport patients via helicopter and became more interested in the continuum of care given to his critical patients. “I thought to myself that getting to see and work with the range of patients that LifeFlight encounters would be a huge challenge and I wanted to be a part of it,” says Patrick.

In his spare time, Patrick enjoys spending time with his wife, Kristine, whom he met in nursing school. He relishes time spent doing anything outdoors, especially camping, home improvement projects and hanging out with friends and family. Every year, Patrick looks forward to bow hunting and fishing with his father and friends. 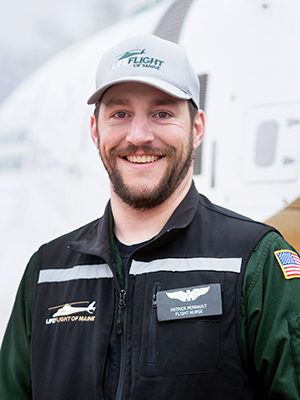