Nicole Gellhaus, BSN, RN, NRP, was born and raised in Sioux Falls, South Dakota. From an early age, she was interested in the medical profession and became hooked after her first anatomy and physiology class. She earned her degrees from South Dakota State University and then moved to Michigan to begin her nursing career in the intensive care unit. After three years in that department, she took on a new challenge in the cardiothoracic surgical ICU. After several years, Nicole had accumulated just the kind of experience necessary to become a flight nurse. She moved to Maine in 2015, when she accepted a position with LifeFlight.

At LifeFlight, Nicole serves on the public relations committee and makes it a priority to attend as many fundraisers and volunteer opportunities as she can, where she can talk with people about the important service LifeFlight provides.

When she’s not working or volunteering, Nicole wants to be outside or just socializing with friends. 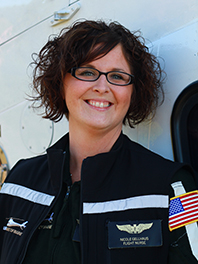