Chuck Hogan, BSN, RN, joined LifeFlight after a 16 year career at Eastern Maine Medical Center, where he worked as a nurse in the emergency department and as the clinical educator. He began his career with a 4-year stint in the Air Force, and subsequently earned his bachelor of science degree in nursing from Husson College.

When he’s not in a flight suit, Chuck can usually be found fly fishing on the waterways of Maine, or running up and down the gymnasium hardwood as a high school basketball official. Chuck also likes to spend time with his wife, two young daughters and two chocolate Labrador retrievers. 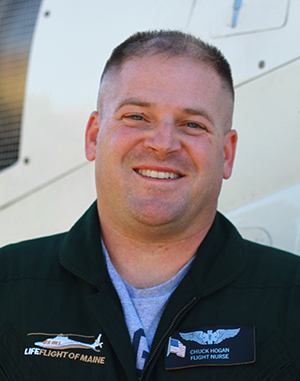