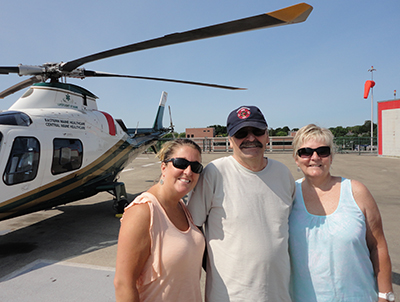 On the coast of Maine, lobstering is a long-standing family tradition. Like loggers in the vast northern forests and potato farmers in Aroostook County, fishermen pass skills, secrets and local knowledge down to sons and daughters, preserving the tried and true practices. This tradition, along with other qualities like a strong work ethic, stewardship of nature and close-knit small towns, forms the unique tapestry of Maine.

One day this summer a thread of that tapestry was nearly lost. Birch Harbor native Roger Chipman, a multi-generational lobsterman and a lifelong volunteer firefighter, was in a motorcycle accident that nearly took his life. A motorcycle enthusiast in the past, he was just returning to riding and was headed back home from Ellsworth on his newly purchased bike. As he rounded a corner on a downhill, the bike malfunctioned, causing him to lose control. He hit the guardrail before flipping over it and tumbling 40 feet down a stump-strewn embankment.

A trained emergency rescue provider, Roger could see that he’d broken his leg, but what worried him more were the internal injuries he couldn’t see. When the driver behind him reached his side, Roger told him to call his wife. And then call LifeFlight.

Over the years, as a volunteer firefighter in rural Maine, Roger has seen many of his friends, family and neighbors seriously ill or injured. In some cases, the care they needed could only be found at a large medical center many miles away. LifeFlight’s helicopter and experienced crew are invaluable in those situations. Now, lying in a ditch nearly an hour away from the nearest trauma center, Roger feared that may be his fate as well.

Paramedics from County Ambulance were the first ones to respond to the 911 call. It took eight of them to carry Roger back up the long, steep embankment and into the back of the ambulance.

At the emergency department at Maine Coast Memorial Hospital in Ellsworth, physicians found Roger struggling to breathe. Both of his lungs had collapsed, his leg and ankle were broken, his hand was crushed, numerous ribs were broken and his spleen had ruptured. They placed a breathing tube and prepared him for a helicopter flight to Eastern Maine Medical Center in Bangor.

Just as the flight crew got ready to take him to the aircraft, Roger’s heart stopped. The crew and emergecy room staff immediately began CPR and administered adrenaline to restart his heart. He also received blood infusions to maintain his circulation. During the short flight, the crew gave Roger additional rounds of adrenaline and blood to keep his circulatory system from collapsing. After suffering so many critical injuries, they weren’t hopeful that Roger would survive the night.

He underwent surgery the next day and, with a titanium rod in his femur, Roger spent nearly two weeks in the Intensive Care Unit. After several weeks of rehab, including a couple of discouraging setbacks, he was well on his way to a full recovery. Before summer was over, Roger was back on the water, hauling traps and teaching his grandson, Tyler (who’s also a junior firefighter), the finer points of being a lobsterman in the small town he’s called home for more than 60 years.